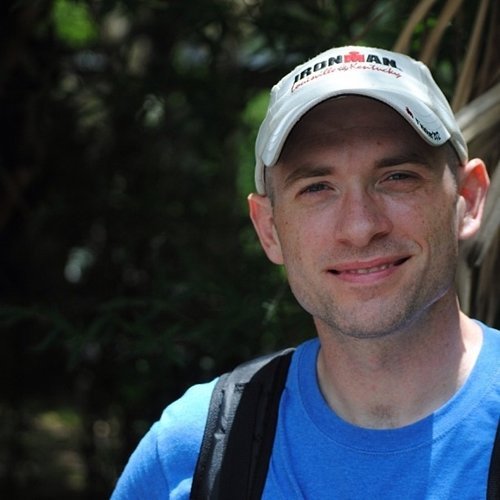 We recently interviewed Dustin Hinton, a three-time IRONMAN triathlete, dedicated father and vegan. In part one of our two-part interview, which you can read here, Hinton shared his story.

Here, Hinton shares his tips for living a vegan lifestyle and discusses the positive impact that veganism can have not only at the individual level but also on environmental and community levels.

Though Hinton is a man of big goals, his philosophy on going vegan and encouraging others to do the same for both personal health and a positive impact on the world is based on taking small steps:

Hinton says that some people go cold turkey and jump right into veganism, but this isn't the best path for everyone and can maybe lead to long-term failure:

"Anybody can do anything for six weeks. But can you do it for six years?" he asks.

Personally, Hinton says that living in New Orleans – "the worst possible place ever in the history of humanity to try to become vegan because you're surrounded by the best food on the planet" – was a challenge when he was becoming vegan, but he's never looked back.

Hinton says that anyone easing into veganism should make it fun and routine – rather than a chore – by hosting a vegan night, just like pizza or pasta night:

Be in the now

Along with easing into it, Hinton recommends living in the moment to stay on track:

For many people, Hinton says, this will eventually snowball to a greater commitment to veganism​, or at least healthier eating.

Eat that cupcake if you need it

Though he is very disciplined in his eating – only enjoying the occasional "cheat" night and always avoiding sugar – Hinton says that if you're the type that needs that brownie, go for it.

On sustainability and compassion

When asked earlier in our conversation about his motivation for becoming vegan, Hinton mentioned dual reasons:

"A lot of it started as health, but I've always been very conscious of animals – there's a lot of compassion and a lot of health involved in that choice," Hinton says.

He explains that for someone who cares about the humane treatment of animals, even easing into veganism can help because, though it may not seem like a lot, going vegan even one or two days each week, year-round, "may be enough for somebody to order one less cattle to be slaughtered."

Hinton's compassionate nature extends to his meat-eating friends, of course. He doesn't "bash them over the head with it," but instead explains to them his reasons for a vegan diet, and encourages them to try to eat smaller portions of meat.

So, what if you want to use your veganism for good by encouraging others in your social circles to make the change? Hinton says to be gentle.

What does this mean to Hinton? It's about bringing his meat-loving friends to Mellow Mushroom, their favorite place to grab a pizza, where they order the Mega Veggie.

But it's also about respecting others' choices. Hinton's young son is not vegan – he cooks meat and other foods for him because he feels that veganism is a choice that he needs to make when he is older. Hinton also explains that it's important to him to provide his friends with information, to explain his own decisions to them, but to not judge them and let them make their own choices.

Hinton encourages people trying veganism to seek out foods at their local farmers market, where they can make a direct economic impact on their community as well as connect with others. In fact, he paints a scenario of the variety of positive influences veganism via farmers market purchases can have on many levels:

"You can shake hands with the person that grew the food. You can ask them about it, you can make a connection. So, now it's not, 'Hey let's go to the store and buy our groceries … and go home and close the door and lock it and watch TV and bar ourselves in,'" he says.

Instead, you can form relationships with community members and create sustainability:

"Now you're meeting the local community, you're handing the local community cash, you're helping them sustain. You're creating sustainability … [and providing a chance] for families to do more. Maybe your purchase twice a week … is just that little bit to push their crops to expand into another field," Hinton says with increasing animation.

And for Hinton, this is what it's really all about.

Previous Post
Vegan IRONMAN triathlete Dustin Hinton shares his story
Next Post
What are the health benefits of downhill skiing?