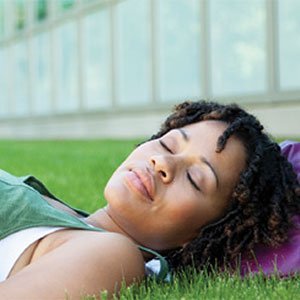 Are you getting enough quality sleep?

One of the biggest contributors to early aging is poor-quality sleep, according to Andrea Purcell, ND, Portal to Healing Naturopathic Clinic, Costa Mesa, CA.
“Many people go to bed with lights on or surrounded by ambient light, which can interfere with sleep schedules and quality.”

Stress prematurely compromises hormone production and, over time, your cells aren’t able to repair themselves. We age because stress and lifestyle factors such as improper sleep and hygiene cause hormone depletion. But by triggering the release of growth hormones, sleep helps rebuild healthy cells and decreases the aging process.
Fight it: Sleeping at the right times helps our bodies repair the damage done during the day. And you don’t need to get a full 10 hours; you just need to maximize your hormonal release by sleeping at the right time. Your brain releases the hormone melatonin in response to darkness, usually between 9 p.m. and 11 p.m. This triggers the release of a hormone called prolactin between 11 p.m. and 1 a.m.; which activates the human growth hormone (HGH) throughout the night and helps repair and replenish the body.

Too much fat and salt?

If you eat a high-fat diet and too many high-sodium processed foods, you are more likely to experience accelerated and worsened cardiovascular aging, according to Douglas Seals, PhD, professor at University of Colorado at Boulder. Such dietary habits can also lead to weight gain, especially in the abdominal area. As you age, you typically gain body fat—it’s where that weight accumulates that determines if it will affect your heart and cardiovascular system. Fat accumulated around the abdomen is a different kind of fat that secretes molecules that are harmful to your heart.
Fight it: Eat various fresh green vegetables for their antioxidants, which can help protect your brain and heart from free radicals and the development of oxidative stress. Do aerobic exercise at least three to four days a week and eat a healthy diet low in fat and sodium and high in fresh, nutrient-rich foods.

As you age, your body doesn’t process alcohol as efficiently as it does when you are younger, according to Avid Oslin, MD, associate professor at University of Pennsylvania. Alcohol consumption leads to a pattern of impaired executive functioning and impaired memory and interacts with many medications, particularly in older adults. For some medications, alcohol will change how much of the medication is needed to control the underlying condition, such as insulin regulation, which can result in an increase in side effects from the medication. For other medications, alcohol can interfere with how the medication works and thus make the medication less effective (for example, antibiotics and antidepressants).
Fight it: Stick to moderate alcohol intake only; no more than one drink per night and try to make it red wine, which contains antioxidants. Remember: a 70-year-old who consumes the same amount of alcohol as a 40-year-old will have a higher blood alcohol level and will show more impairment. Also, your brain doesn’t tolerate as much alcohol as you age. Thus moderation is always the key.

Previous Post
Why do I crave sweets after a meal?
Next Post
3 Modern Strategies for Healthy Aging