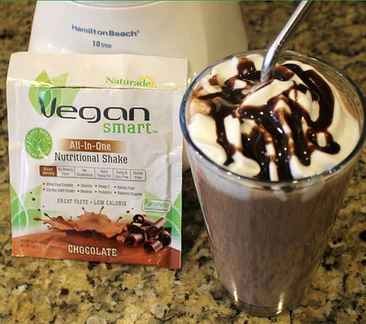 Let me start by saying I’m not vegan. Not even close to vegan. I love me some meat (in fact I crave it at times) but I do think everyone can benefit from being a bit healthier. We all could use more vitamins and nutrients. No one eats a perfectly balance meal at every meal – there’s always some give to it.

Maybe you’re running late for work or rushing out to a kid’s sports game and either entirely missed a meal or decided to grab a quick, unhealthy choice. It happens. That’s why I love quick meal solutions like Naturade Vegan Smart Nutritional Shakes.

They are perfect for anyone (even non-vegans) to quickly gain some of the nutrients you may be missing otherwise. Naturade Vegan Smart Nutritional Shakes contain a complete protein blend, 22 vitamins & minerals, fiber, probiotics, and even a digestive enzyme blend to make sure you absorb all of its wonderful nutrients properly. It also has nine different fruits and vegetables and 200mg of Omega 3’s to support your brain, heart, and circulatory system.

It packs quite a punch in the nutrition department and is really easy to make too. Just mix a packet of Naturade Vegan Smart Nutritional Shake in 9 to 11 ounces of cold water, juice or non-dairy beverage, shake, and enjoy.

You can definitely taste the almond coconut milk in the Vegan Frozen Hot Chocolate. It totally gives it a creamier texture than if you were just using water.  Overall, I love the convenience and nutritional value of Naturade Vegan Smart Nutritional Shakes.

Previous Post
VeganSmart Chocolate Syrup Topping Recipe
Next Post
Is it Okay to Workout When You Have the Sniffles?