What are the healthiest seafood dishes? 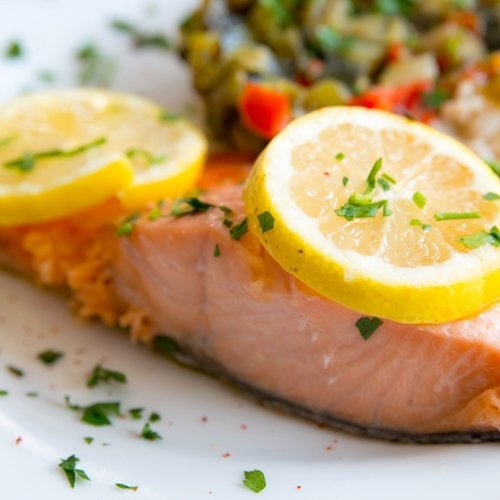 If you already haven't figured out whether fish are friend or foe when it comes to maintaining a healthy diet, it's time for you to make a new companion. Seafood is always an excellent addition to any meal, bursting with a wide variety of nutrients that can also account for a remarkably high protein meal. Fish are typically rich in essential omega-3 fatty acids, and, according to the Harvard School of Public Health, eating multiple 3 ounce servings of fatty acid fish per week can reduce the likelihood of cardiovascular complications by 36 percent. So, where should you look for a health dinner?

Salmon
One of the more incredibly abundant seafood options when it comes to healthy benefits, chowing down on some salmon a few times a week can offer you everything from boosting your brain to helping your heart. Salmon is packed with a long list of nutritional amenities, such as vitamins A, B, D and E, high quality protein as well as being loaded with omega-3 fatty acids. The good types of fat contained in a serving of salmon can reach up to three times the minimum recommendations for omega-3 fatty acids, which will in the long run provide better overall heart health, boost your immune system and strengthen your synapses in your brain.

Oysters
Often marketed as a luxury seafood of delicacy, oysters can be just as rich in health enhancing qualities. First off, they are low in calories, which means that you can eat a greater portion with less calorie consequences and feel full quicker, which can help boost your metabolism. They are also an excellent low fat-high protein combination, with servings containing anywhere between 10-16 grams of protein with only 3-4 total grams of fat per 3 ounce serving.

Albacore tuna
While most tunas are often found to have the highest levels of mercury among the different kinds of seafood, albacore tuna are mainly caught in northern waters which generally tend to have lower mercury levels and more omega-3 fatty acids counts than other types of canned tuna. Albacore tuna is also a great low fat entree choice, with just one can only amounting to 8 percent of your total fat recommendation.

Sardines
There's a rule of thumb when it comes to seafood: the smaller the fish, the lower the amount of mercury, which is good news for lovers of these small little guys. Sardines are often overlooked for their abundance in health benefits, and each can includes 35 percent of your daily recommendation of calcium, 15 percent for iron and 10 percent for potassium.

Fish to avoid
There are plenty of other types of fish that might taste just as delicious, but are nowhere near as healthy for you as the other types of seafood listed above. Mercury levels are one dynamic to look out for when it comes to choosing seafood, and fish such as grouper, marlin and swordfish might be considered more expensive and appetizing choices. However, it's strongly suggested that you don't eat more than three servings of these fish per month. Other types of seafood to keep an eye on are fish that tend to live for a long time, which leaves than more susceptible to mercury exposure and other diseases from the sea. Orange roughy is often included on many seafood restaurant menus, but this is a fish that can more often than not be found to live for more than 100 years! Bottom dwellers such as monkfish and catfish are also documented to live long lives while eating scum at the bottom of the sea, so be sure to limit your monthly servings of them as well.

Previous Post
Are you confused over cholesterol?
Next Post
Yoga or Pilates: Which one is right for me?