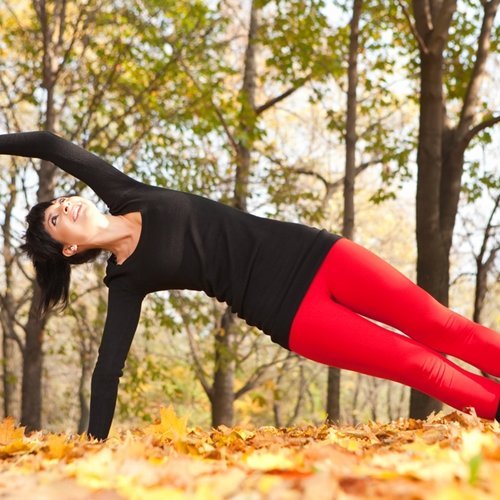 It's time to answer that perennial question: Which is better: yoga or Pilates? But of course, as in most things in life, the answer isn't so clear cut. Instead, it depends on your end goals. Additionally, it also depends on exactly what type of routine you're considering, whether it be Hatha yoga, Bikram (hot) yoga or even piloxing – a Pilates and boxing fusion. Here's a bit more information about each so that you can decide whether yoga, Pilates or the delightfully named Yogalates is right for you:

Yoga
Yoga is a centuries-old meditative practice that has foundations in Buddhism, Hinduism and Jainism in India. Yoga is focused on the connection between the mind, body and spirit. It's meant to be therapeutic but to also improve physical wellbeing through strengthening of the muscles and flexibility of the body. There are so many different types of yoga traditions, practices and positions that it's hard to say definitively which parts of the body they are best for. But in general, because the positions are so varied and can be combined in various ways, they strengthen muscles throughout the body. If you want stress relief and a slow, stretching workout for your entire body, yoga is your best bet.

Pilates
Pilates is a much more recent practice. It was developed in the 1920s by a man of the same name. It was originally meant as a low-impact rehabilitative routine, but today, this series of resistance exercises is used to build muscle flexibility and strength without the bulk. Similar to yoga, Pilates hinges on proper breathing and includes improved coordination and balance as some of its benefits. However, Pilates mostly centers around the core – strengthening and building up stable abdominal muscles for proper posture, stabilization of the spine, balance and overall strength. Pilates is ideal for people who want to strengthen their abdominal muscles, which might potentially reduce chronic back pain. Most Pilates positions can be adapted depending on individuals' differing physical abilities, as is the case for yoga as well.

In summary, you will gain strength and flexibility through both yoga and Pilates, though Pilates is more targeted at the core muscles. Also, Pilates is typically a more structured class so you will know what to expect when you walk in, while yoga positions can be arranged in hundreds of ways. You can definitely benefit from both routines and might enjoy doing a fusion workout of the two.